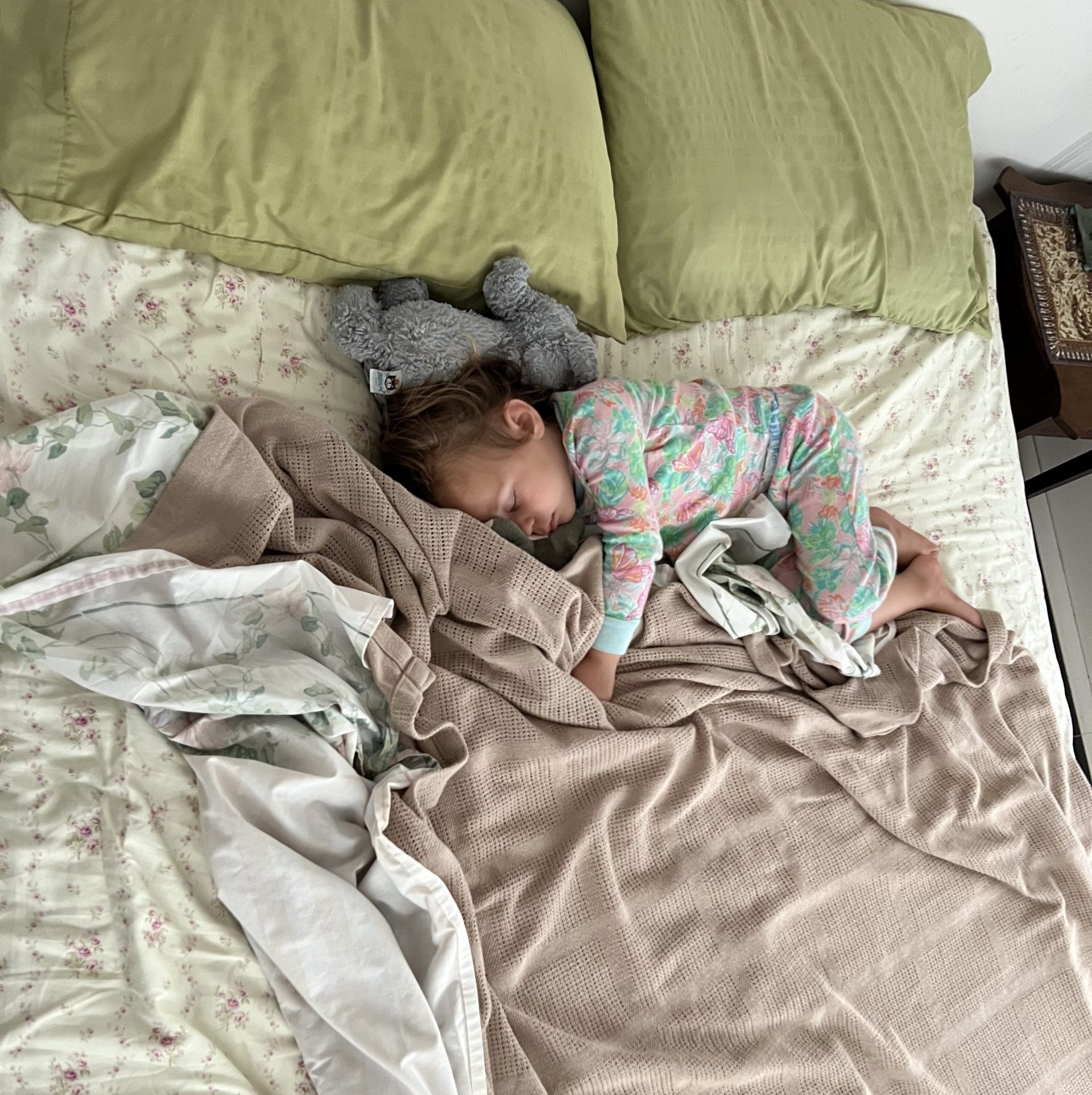 I remember a dire warning issued to me by a Pilates client when I was 6 months pregnant with my first child: SLEEP AS MUCH AS YOU CAN NOW. I also remember being like, wow, dramatic much? In my barely 25-year-old brain, I obviously knew more than her and obviously this meant that she was wrong, that being a mom was, yes, tiring, but gimme a break, it can’t be that bad.

And then my first was born and I genuinely can’t remember a single thing in my life since then hahahaha. 16 years of extreme sleep deprivation and two other kids, guess what? That client was entirely right, and I was entirely wrong. Wrong wrong wrong.

We all know how it goes and we know that some kids have an easier time with sleep and some have harder (insert: impossible) time with sleep. I happen to have the full spectrum in my three daughters and I also happen to be a single mom, a reality that is only moderately relevant here because in our culture, the person who birthed the kid is generally also the person who bears the bedtime burden.

We all also know that there is an additional layer of difficulty with sleep, which has very much to do with the need for alone time that can usually only be captured once these sweet needy kids of ours are finally konked out. And let’s face it – for some of us, that sometimes doesn’t happen until 10pm or later depending on what you have going on in your house. Yet, even though going to bed myself after that would be the wise choice, I somehow find my way to a giant “eff it” button and stay up doing whatever I possibly can that in some way secures independent brain draining delights. Next thing I know, I’ve convinced myself that a 2:00am bedtime is reasonable and that I’ll be totally functional the next day on 4 hours of sleep.

So. Yeah. Now that we’ve covered the surface stuff of sleep as a parent, I’d like to flip this beast on its back and rub its underbelly. I only suggest this after attempting to find a solution on Google, which offered solutions that were either expensive or, well, basic. Let me boil down both the expensive and the basic advice, all of which I am pretty sure you have heard before: 1) Have a consistent early evening bedtime routine, 2) Don’t drink too much caffeine, 3) Meditate, 4) No screens before bed or near your bedroom ever never ever, and – my favorite – 5) Share the bedtime burden with your partner/spouse/gerbil/friendly imaginary friend.

The underbelly of my sleep situation tells me much more. It asks me to take a look at my relationship with sleep not just as a parent, but throughout my life. It’s here that it becomes clear to me that I have never had a great relationship with sleep. In fact, as a kid, suffering from severe clinical OCD, I used to count in multiples of 8 the number of times I looked at a book in the bookshelf by my room before bed. It happened to be On Death and Dying by Elizabeth Kubler-Ross which is rather appropriate because I had convinced myself that if I didn’t do a perfectly counted multiple of 8 glances at this book, I would die in my sleep.

The rituals didn’t stop there. But as I got older and they became harder to perform, I learned other coping skills, namely just exhausting myself completely from a long day of intense physical activity OR by studying in my bed until the wee hours. Instead of “going to bed”, I learned that it was easier if I just crashed out unintentionally, which feels extremely familiar to how I exist today. In fact, after doing this inventory of my sleep history, I confronted the reality that I have never really learned how to put myself to bed.

If I dip back into the feelings of that as a kid and the possible connection of today, I can see a long thread of feeling unsafe. If I tug at that thread a bit, other things begin to unravel, some genetic brain stuff and some trauma stuff and definitely a lot of worth stuff. As much as I have grown up and become an adult, in the end, I still grapple with these things and with issues around safety.

My curiosity here reminds me that, yes, it must have been so hard to let go into the great big unknown of sleep when I couldn’t even let go while wide awake. That’s led to a lot of behaviors around sleep that prevent me from protecting rest. And with some things that have happened to me as an adult, the worth piece has become a bigger component as well. AND then, add in all the surface stuff I mentioned at the beginning of this post, wow. There’s a lot here to unpack, but there’s also a lot that can be changed.

This is where I land then, in a place in my life where I no longer want to feel exhausted and I feel more ready to try another way. I want to know what I can control and what I can’t when it comes to my unique sleep situation and then I want to take some action. It’s time. I have been crashing out for long enough. What would it be like to reparent myself and tuck myself in at night? What would it be like to capture, during the day, the joy and freedom I feel at 1:30 am?

I’ve got a lot to learn here and I know you do too. I’d love for you to join me as we head straight into the topic this month in our August Challenge: Sleep WTF. We will be talking surface level stuff and also deeper stuff. There will be a TON of room for you to discover your own stuff around sleep, which is probably different from mine. We will compare expert advice and engage with real deal realities.

And in case you don’t know what the heck a challenge here is like, basically, you register, you join the challenge group in our community, you listen to one short episode of our mini podcast each week, and you comment or discuss as you like. OH, and you try to show up for 5-15 minutes of exercise as often as possible during the challenge.

The challenge starts on Monday, August 1, which is SOON. I’ll also be doing a live 15-minute workout at 9am CST on our Instagram (@momma_strong) if you want to kick things off with me. Otherwise, if you are a current member, you can register by logging in to your account, clicking the “Challenges” link in the teal navigation menu and following the instructions there. If you are a new member, HELLO! Simply sign up for our 14-day free trial and follow those directions above.